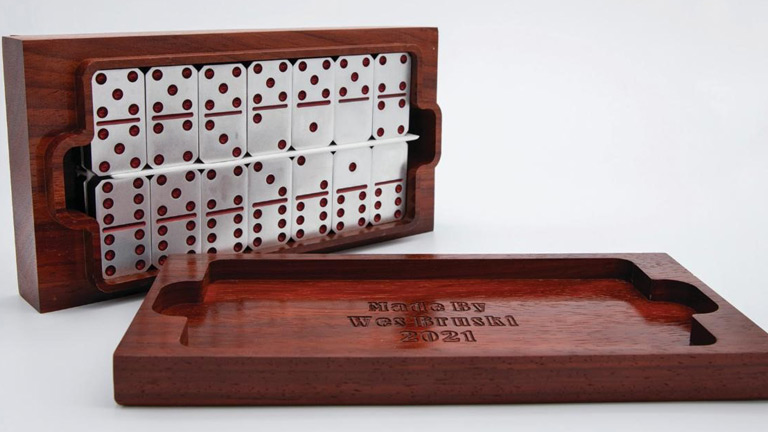 Tolland, Connecticut – Mastercam has announced the winners of the 2021 Wildest Parts competition. The Wildest Coin Contest is held annually to encourage student interest and participation in the making.

The competition is open to high school and post-secondary students to create pieces demonstrating their creativity and technical skills using Mastercam. The Wildest Parts Competition also has a division for professional Mastercam users to grab the parts they have created.

“We always look forward to seeing all the applications we receive for Wildest Parts,” said Peter Mancini, Product Manager, Education at Mastercam. “There are so many talented and dedicated teachers, and the quality and originality of their students’ work with Mastercam is inspiring. “

In the high school division, Wes Bruski of Capital High School, MT, submitted a game of dominoes and dice cup. Wes and his family have always loved games, so Wes came up with the idea of ​​creating a custom set of dominoes and dice cups. Wes made the wooden prototypes, then machined the final set. He enjoyed every second of this project and learned so much about machining throughout the process. Second place went to Cadogan Wheat from Hamilton High School, Montana, who designed a padlock model.

In the post-secondary division, Gus Bronk of Washington State University submitted a keyboard. Gus wanted to design and machine a unique keyboard from exotic materials. The main housing is machined from a Boeing Surplus Forged aluminum billet of the 2000 series from the 1970s! This project contained the largest single part and the most number of parts that Gus had ever machined and assembled. He learned a lot more features in Mastercam while doing this part. Jim Courtney of Erie Community College, New York, placed 2nd with a working carousel, and Jonathan Hughes of Erie Community College came 3rd with a ball machine.

In the team division, Wrindy Hauser’s team from Grand Rapids Community College, Michigan, submitted Thor’s hammer. The team members are part of a machinist apprenticeship program at GRCC. In making Thor’s hammer, they said they wanted to do something that people are passionate about machining. When someone looks at their project, they’ll think it’s awesome and want to learn how to make it happen! Jiao-Hao Wun’s teammates from Vanung University in Taiwan placed 2nd with their modern museum. Vanung University’s Ming-Yang Chen team placed 3rd with their robot.

In the professional division, Andy Beach of Grand Rapids Community College submitted Ironman, which was created to test a brand new UMC 500 Haas mill where Andy works. The machine was the first 5-axis machine installed at Grand Rapids Community College. Andy wanted to thoroughly test the machine by machining a multi-axis part that would overcome the size constraints of the machine. David Berry of Southwestern Illinois College placed 2nd with a Mastercam toolpath dodecahedron, and PUTEN PLUS came 3rd with a wireless charging disc.