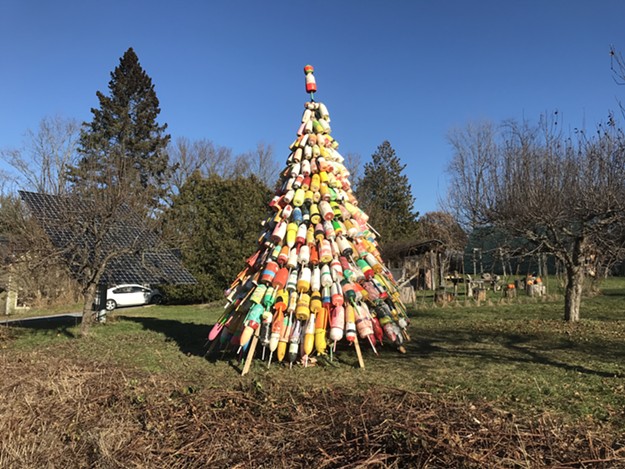 This little riff from the traditional Christmas tour, “Christmas is Coming”, is an ode to Nick Patch from North Ferrisburgh. Patch has created his own holiday riff: building a Christmas tree out of buoys in his backyard.

Buoys have been piling up in Patch’s Barn for 17 years – a colorful collection of Maine coast memorabilia his family gathered while on vacation in Penobscot Bay. On annual summer trips, Patch, his wife and daughter collect plastic trash that is washed ashore. As part of this effort, they are collecting lobster trap buoys that have been overturned and dropped by motorboats, or detached in stormy weather.

The Patch family take the trash to the landfill and load the buoys into their van to take them home. Patch said his daughter, Rory, now 20, was the main motivator for collecting abandoned buoys.

The collection of buoys in the barn at the corner of Old Hollow and Four Winds roads grew until one day there were around 400. But there was no corresponding plan of what to do with them.

“I had absolutely no idea,” Patch said.

A few weeks ago, at the suggestion of a friend, Patch set out to build his buoy tree. His friend Ben Mayock from Hinesburg saw a photo of a similar tree and alerted Patch to his discovery.

Patch is a carpenter who teaches boat building to teens at the Lake Champlain Maritime Museum. A buoy tree is part of his artistic milieu. Yet he designed and built it from scratch.

Patch began by ramming an 18-foot center post a few feet into the ground. He built a frame of eight pine posts around the centerpiece; each post measures 18 feet by two inches by two inches.

“When I built the tree frame, I kind of winged it,” Patch said. “It ended up being almost exactly the [number of] buoys we had. It is truly miraculous.

He put a parachute rope around the frame and attached the buoys to the rope with mini carabiners. Patch topped the tree with two buoys that he put together. A large bulb in the center of the tree lights it up from the inside; little Christmas lights are strung around. Patch got help on the project from Mayock and Patch’s wife Judy Elson, a teacher at Ferrisburgh Central School.

“I’m thrilled,” Patch said of the tree. “I wasn’t sure. But I think it exceeds expectations.

Patch’s latest project adds to a festive display of homemade holiday decorations in his backyard. These were also inspired by Rory, who asked for an inflatable deer as a child. His wish went against his father’s aesthetic.

“As a boatbuilder and carpenter, I couldn’t have it,” Patch said. “I wasn’t going to go.

He built a reindeer out of logs and tree branches, and made one a year until he was nine. The reindeer spend the summer in the barn with the buoys and are placed in the yard seasonally, decked out in lights. Near the reindeer is a nice little astronomical light show: a star, the moon and Saturn formed from colored bulbs and placed at the top of a pole.

“Everyone was pretty blue about the pandemic,” he said. “We all need a little help during the dark days.”

Ever since the lifebuoy tree went up on Thanksgiving week, people have stopped every day to take a look. “People seem to like it,” Patch said.

But Rory, who spotted and gathered the material, didn’t see it. She’s in college in Montana.

“She probably thinks I’m a little crazy,” Patch said. “But that’s what fathers are.”