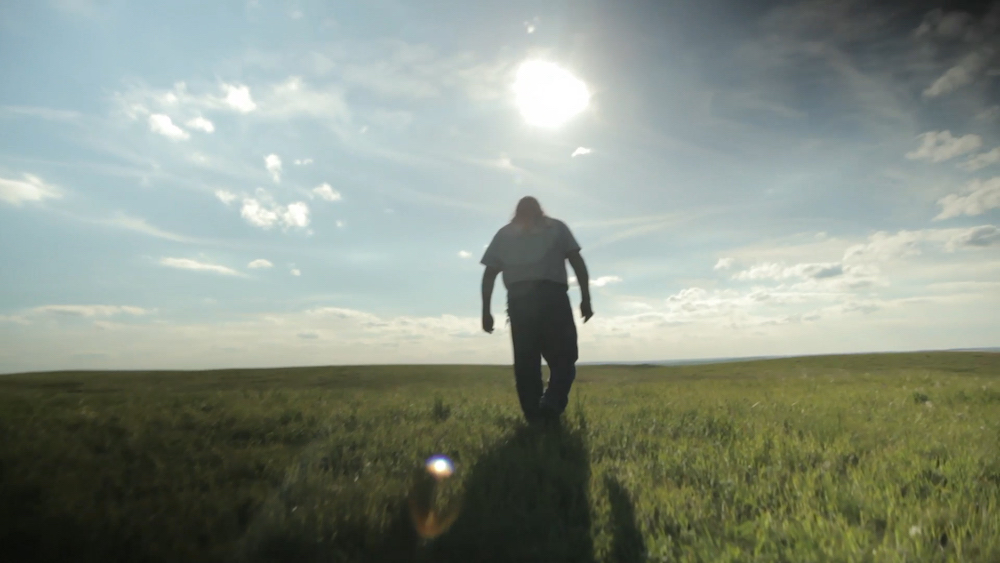 Believe Media, led by CEO and Executive Producer Liz Silver, announces festival premieres for the documentary short, above the boy. The film follows the Chipps family, members of the Oglala Lakota Nation on the Pine Ridge Indian Reservation in South Dakota and is directed by Sebastian Funke, Jan Vogel and Lucy Martens. On Wednesday, February 23, the film will make its world premiere at The Wilma in Missoula, Montana as part of the Big Sky Documentary Film Festival and joins a selection of twelve films from the festival competing for “Best Short Film”.

above the boy highlights the spiritual foundation of Godfrey “Mikal Okshila (Above Boy)” Benjamin Chipps, a fourth generation descendant of Horn Chipp – the medicine man of legendary Indian Chief Crazy Horse, and dives deep into the modern realities of the reservation through the experiences of his wife (Beverly Red Elk), sons and daughters.

“Our way of life is forgotten and it’s not good,” commented Opijeta (Opi), Godfrey’s son. “Everything is not perfect, but we stick together and we will survive.”

The film is set over a two-year period in Wanblee, South Dakota, in the heart of the stunningly beautiful Badlands, but is also inhospitable and remote. With one of the highest unemployment rates and the lowest per capita income in the United States, those who leave for a better life ironically still return often, as life off the reservation faces racism, loneliness and separation.

“Pine Ridge is like a lunar landscape – freezing in the winter, boiling hot in the summer,” notes Funke. “Most surrender to this harsh environment to keep their families intact – forgetting their traditional way of life and ceremonies as they attempt to assimilate into American culture.”

A poignant and remarkable moment in the film is the sequence of “Rez Life”, an original song written and performed by Opi. The rap song catalogs Opi’s painful experiences on the reservation and his transition to becoming a dad. The track is now available on SoundCloud and YouTube.

The catalyst for this project was born out of the personal and spiritual quest that captivated Vogel in 2012. During a spiritual journey, Vogel attended an Inipi (smudging ceremony/sweat lodge) in Arizona led by an early Godfrey’s apprentices. Godfrey’s friends encouraged Vogel to meet Godfrey himself to experience one of his healing ceremonies and gain an honest understanding of modern life on the reservation. From there, Vogel was invited to Wanblee where he took part in a four-day series of healing ceremonies for Godfrey.

“Godfrey and I talked about my interest in making a movie about the reservation and he immediately understood the concept,” Vogel recalled. “In the 70’s he began to travel off the reservation to teach Lakota spiritual healings because he wanted their traditions to survive, but life circumstances derailed him for a long time and felt he had to revisit this mission with a film.”

In 2013, Vogel pitched the film to Believe Media executive producers Luke Thornton and Liz Silver. Aligned with their company’s ethos of creating beauty and humanity in every pursuit, Thornton and Silver joined the filmmakers on the reservation for a sweat lodge initiation ceremony.

“Our work on above the boy began many years ago and spanned many years with our relationship with the Chipps family that endures beyond the film,” Silver notes. “Beverly and Godfrey invited us into their lives with warm generosity and sheer vulnerability; we are forever grateful to have been welcomed into their world and commissioned to tell this story to a community outside of their own.

As producer, Godfrey not only led the film crew through the process, but he only remained engaged if the filmmakers agreed to tell the story based on where the spirits led him. Although this guided method created an interesting and complex shooting schedule for the filmmakers, the exposure ultimately helped reflect real-life reality.

“Every documentary is a complete initiation,” says Martens. “If you work with indigenous communities, you work the way they work and can’t come up with your set of ideas because you’re not aligned with their spirit. There is so much ancient wisdom and unity, if we listen.

“In many ways, that led to the movie turning out to be different than we imagined,” Funke shares. “Living there and being with them, just the time there to build trust naturally led us to do it with a human aspect and that personal story of that family, not just the general image of Godfrey being that medicine man.”

“Something happened, something didn’t happen – he (Godfrey) wanted us to experience what he’s talking about and not allow us to just choose the parts we want,” Vogel adds.

Tragically, Godfrey did not survive the completion of the documentary process. It was his intention that the film be completed and shared to educate younger Lakota generations.

Filming the Chipps family reveals how strong faith, love and hope can be, but also how despair, loneliness and inequitable circumstances can keep the cycle of poverty alive. With little chance of employment or a decent education, coupled with the highest levels of drug abuse, suicide, violence, and teenage pregnancy, the ideals of maintaining Oglala Lakota Sioux spirituality and traditions are greatly challenged.

“I’m glad we published my father’s story,” adds Opi. “Few people in our community will speak, but there is more to know about our family and our people. The story is not over. »

The film will be screened in person at the Big Sky Documentary Film Festival on February 23 and 24 and online from February 21 to March 3. The 2022 Black Hills Film Festival will also host screenings of the film later this spring. Visit aboveboy.com for current updates.

About Believe Media
Believe Media is a production company with offices in Los Angeles, New York and London. Founded in 2000, Believe has never viewed the potential for creative collaboration as limited in scope or scale, by language or location. Bringing to each project a wealth of experience and a cache of adaptive strategies accumulated over many years, Believe provides top-notch work for the world’s most renowned brands, agencies, record labels and iconic music artists.

About the administrators
Sebastian Funke was born and raised in Hamburg, Germany, and studied law in Berlin and film at the New York Film Academy. Sebastian works as a commercial director and his first documentary ‘Djambo’ was filmed in Sierra Leone and premiered at the African Film Festival. above the boy is his second documentary film.

Jan Vogel was born in Quito, Ecuador and studied cinema as a cinematographer at the American Film Institute in Los Angeles. Shortly after film school, Jan was signed to Believe Media and directed numerous commercials and music videos for international clients. Jan founded the production house Dickes with two associates in Berlin, Germany in 2004. In 2010 he made his first feature film “Wasted Youth” in Athens, Greece, which opened the Rotterdam Film Festival in 2011.

Lucy Martens’ passion for building bridges through storytelling has led her to capture voices from all corners of the world. As a cinematographer, director and editor of documentaries and NGO films, her work has appeared on BBC Storyville, BBC 3, PBS, ARTE, Canal Plus and CNN. She shoots feature documentaries and edits short films for NGOs and foundations, such as UNHCR, UNICEF and WFP. Her documentary feature, “Out of the Ashes” (BBC Storyville) was co-produced by Sam Mendes and won a Grierson Award in 2011. She is part of Ripple Effect Images, a non-profit collective of world-class storytellers whose the work supports aid groups that empower women and children. She is also co-founder of Le Ciel Foundation, a London-based charity whose aim is to connect ancient wisdom with the best of modern society. As part of Le Ciel Foundation’s mission, she co-directed and filmed “The Twelve”, a feature-length documentary about the wisdom and knowledge of twelve Indigenous Elders from around the world, which is free to download and share.